I loved my first version of the Tilly and the Buttons Rosa dress in a floral viscose fabric but my initial plan for this pattern was to do a denim dress. I got the fabric from Barry’s fabric in Birmingham and it is a dark indigo stretch denim. I decided to do the top stitching in a thread of a similar colour to the fabric as having never done topstitching like this before I didn’t want it to show too much. I also found some gold buttons on the rag market which just give a bit of different colour to it.

I was stuck for ages on which size to cut out. My previous Rosa had been the size 4 (equivalent to size 12) but it was big, however that didn’t matter, in fact it was a good thing as it looked better being loose fitting. I didn’t want this one to be that big but my bust measurement was too big for the size down and so I thought it might be too tight in that area if I cut out the 3. Going with this I cut the 4 but knew I would have to take it in at the waist and hips. I am very nervous about pattern grading as I am worried I will make a mistake and it won’t fit right. I much prefer to cut out the full size and then adjust at different fitting stages.

I was also torn on whether to do the full sleeve using the free download or the original rolled up sleeve. I can’t even remember why now but I decided on the rolled up sleeve, probably because I would roll the sleeves up anyway.

Anyway, once it was cut out the construction was once again straight forward. The only difference from my last one was doing all the mock fell seams. I am so pleased with how these turned out! I did a practice on scrap fabric to get the measurements for the width between the two rows of stitching and to check the seam length with the topstitching thread. It was so easy to do and looks so professional and effective even if you do have to look quite close to see it because of the colour!

I also added the pockets to this version which I think look really good. The collar worked better this time, although I still get confused as to which part is which, however the collar stand is a much better shape and can actually fasten properly.

When it came to doing the side seams I kept to the seam allowance in the sleeves and to just under the bust but then made it more straight rather than curving in and then back out for the hips. I have more of straight up and down figure with not much of a waist or hips and so because the fabric doesn’t drape much it would look strange. I ended up taking it in at least a couple of inches of either side at the hips, tapering it in to the bust as that didn’t need changing at all. I also ended up taking about another centimetre off the sleeve seams as they felt a bit big and I just needed them to grip my arms a bit more. Finally, I also took in the sleeve to shoulder seam seam by about a centimetre but only at the top as my shoulders are not that wide.

The final finishing off steps always seem to take ages even though they are very straight forward. I took the hem up by about 5cm and re shaped it because of taking so much in at the side seams. The last touch was to sew the button holes and sew on the buttons. I did make a belt as well but I think it works better with my brown leather belt. What do you think?

I hope you like it. I will definitely make another Rosa, maybe in a lighter denim so watch this space. 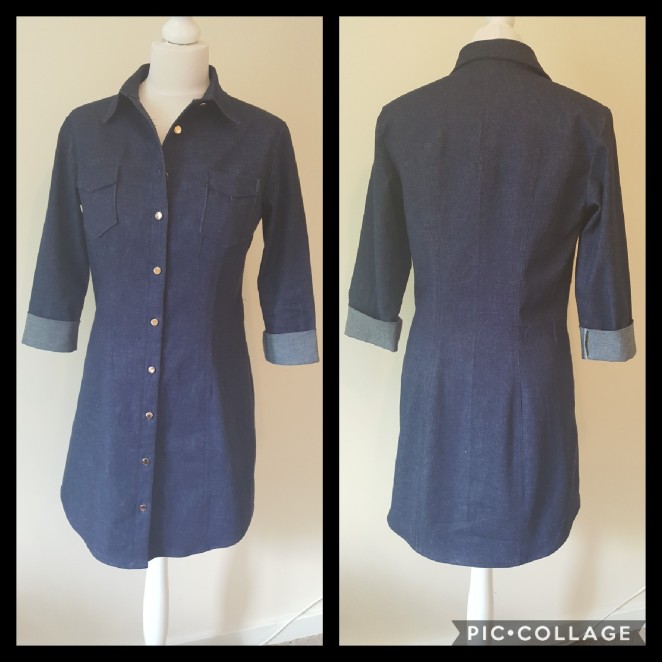 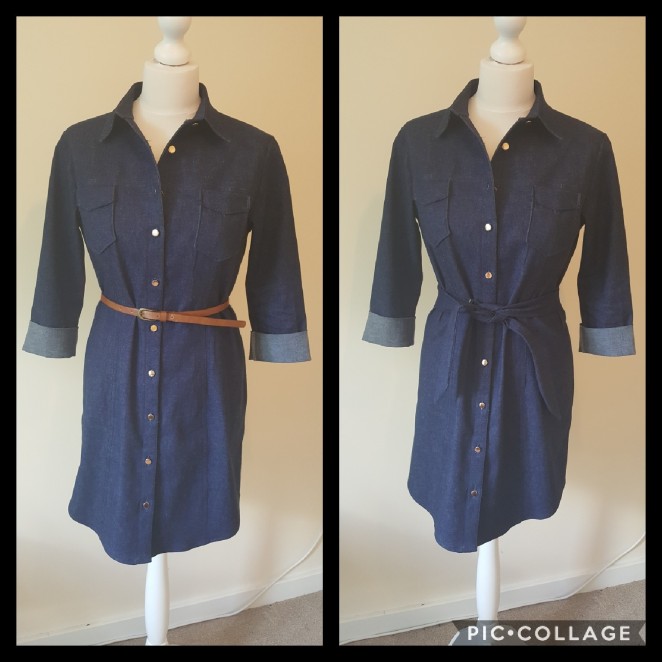