Ever since the Handmade Fair in May me and my sister had planned to have a weekend together to do some sewing. We also thought it was a good idea to go back to my parents house so that my Mum could be there and make something as well, a Big Family Sewing Weekend! It was my sister’s birthday a few weeks before our meet up and so I decided to buy her the fabric and everything else she would need. We had said right from the start we wanted to make a pair of trousers each and so with that in mind, I got both of us some stretch cotton. I got mine at the Handmade Fair and I ordered hers from Minerva Crafts. They were very different fabrics as we both have different styles and body shapes and wanted them for different reasons.

I decided to use the Sew Over It Ultimate Trousers pattern as it was the style we wanted and having seen quite a few made up on Instagram it looked like it could work quite well. It took a while for me to print out the PDF as I couldn’t it to print the right size from my tablet, but it eventually worked out. I’m not sure if it is my tablet or the Sew Over It patterns, but I had no trouble with the Tilly and the Buttons PDF’s so I am not sure why ghis one didnt work as well.

So the weekend came and we got up early! As simple as the construction is for trousers we knew would would have trouble with the fit and so they would take a while to complete. I had already cut out my pattern pieces at a size 14 to fit my waist but knew that they would need grading to fit my hips and legs, as a family we have very skinny calfs. My sister cut out the 10 and we hoped she wouldn’t need as much fitting.

At the same time my Mum was trying to cut out her top. She had a small piece of black and white floral jersey and was trying to get the Simplicity K8089 out of it. She didn’t want the long sleeves so that helped but even without them she needed to alter the pattern pieces slightly to fit them on, but with very careful pattern Tetris it worked.

For our trousers we attempted to fit each leg first, as per the instructions, before we did the crotch seem. After a lot of pinning and trying on we thought we had them sorted, but when we did the crotch seem and tried them on again both of us had so much excess fabric at the crotch. After a few attempts and a bit of research I unpicked the centre of the crotch seam and a bit of the inside leg seam. This the allowed me to take about 2cm of the front inside leg seams (I didn’t alter the back pieces) and grade it back to the initial seam about 3 inches down, the crotch seam then stayed the same. I also had to take the back seam in by at least 2 inches and the front by another 1! This makes me think I could have easily got away with using a smaller size. My sister also had to make some crotch adjustments but no where near as many as me, mainly just at the centre back and front.

Having finally finished all the fitting the easiest bit of the whole make was putting in the invisible zip. I turned my facing into a small waistband and finally hemmed them. My sister kept her facing but had to make a few cuts to it so it didn’t roll over the top, she then used the cuff method for the shorts version to hem her trousers.

Mum’s top should have been straight forward and finished well before our trousers, however the neck and wasn’t lying flat and so after taking it out a couple of times finally 3rd time lucky it was in. The rest of the top was finished in no time but she added cuffs to the sleeves instead of hemming them.

We eventually finished everything by lunchtime on Sunday after starting early Saturday morning and I wore my trousers for the rest of the day. LOVE THEM! I will definitely be making them again, but maybe in the size 12 with a few adjustments. Our next family sewing weekend is already in the planning, probably after The Great British Sewing Bee Live where we can buy patterns and fabric! 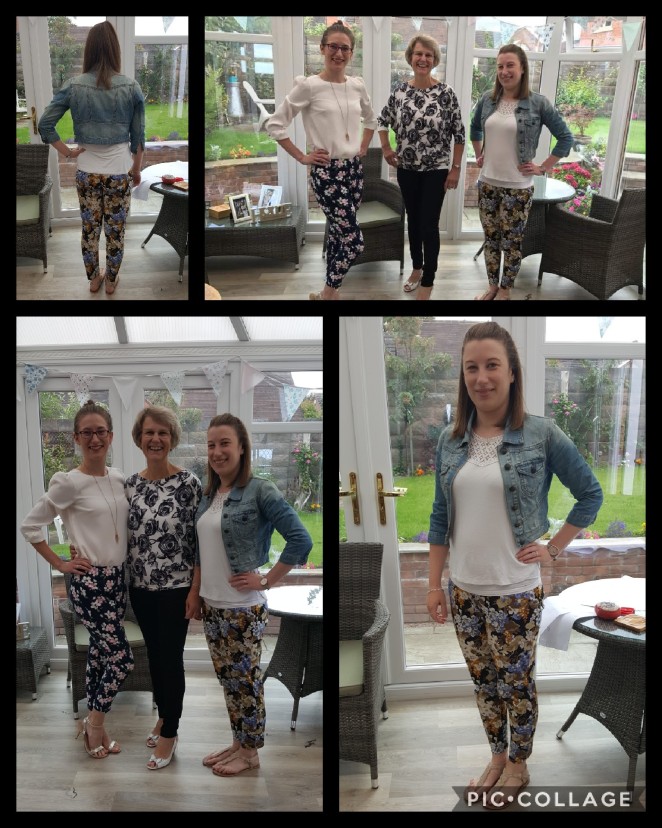